Pinoy Youth looks forward to a foretaste of Europe 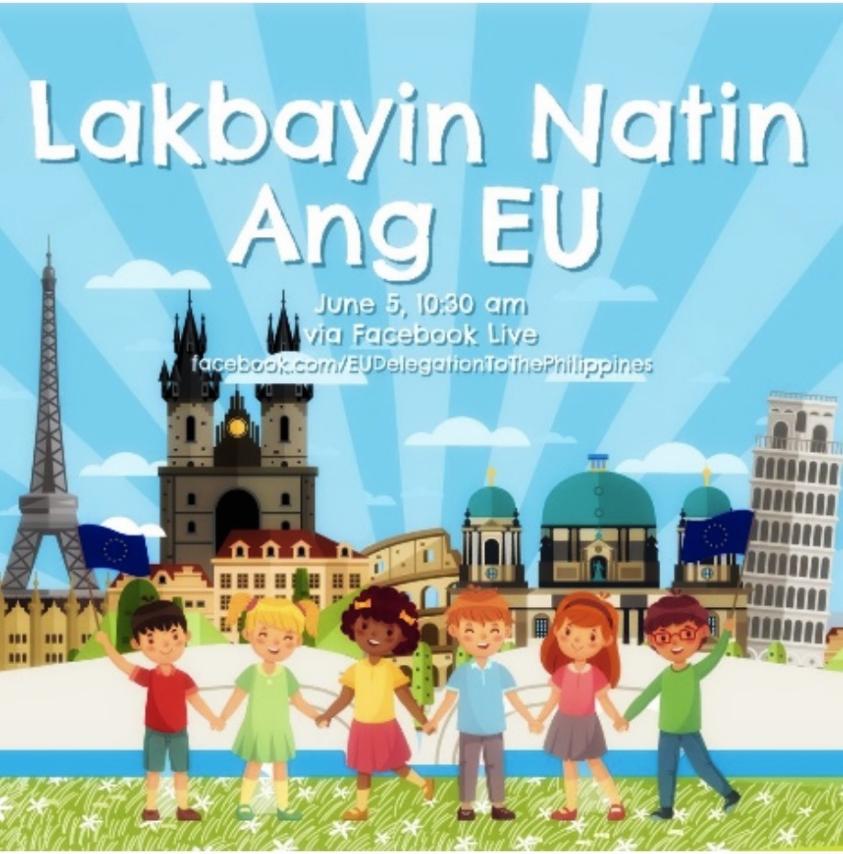 Pinoy children and youth are in for a special cultural treat this weekend on Friday 5 June at 10:30 a.m. and on Saturday 6 June at 8pm through the FB page of the EU Delegation to the Philippines.


The European Union Delegation to the Philippines together with the Embassies of Czech Republic, France, Italy (through the Philippine-Italian Association), Poland, and the Manila Street Astronomers have developed a cultural extravaganza of films, games, songs, stories, and an astronomy event.

EU Delegation to the Philippines Chargé d’Affaires, a.i. Mr. Thomas Wiersing, said that the “Lakbayin natin ang EU” and “Ode to the Stars and to the Moon” aim to enable children to learn about the European Union without having to physically visit the continent, especially during this pandemic. While both events have been organised previously, this is the first time that the EU Delegation and its partners have ventured into holding the twin events virtually.

France is the birthplace of film and  has contributed  immensely to the history, enrichment of the film as an art form. “Fantasmagorie” is an animated film from France by Emile Cohol and is said to be one of the earliest examples of traditional animation.

The French Embassy in this year’s edition of  “Lakbayin natin ang EU” has lined up the following  children’s films which are accessible until 25 June:

Raoul (Embouteillages, on traffic) Getting caught in traffic, and how to get out of it https://vimeo.com/70768878

Le Ballet (on watching a ballet at the Opera)

Travelling through the EU: Czech Republic, Italy, and Poland

Perhaps, it would come to a surprise to many Filipinos that the Czech children also play two of Filipino’s favorite games: the skakani panaka (similar with “piko” or ”hopscotch”  and guma “Chinese garter”.

Interestingly, the Embassy of the Czech Republic will demonstrate how exciting and how similar their two games are with the kind of games that the Philippines has.

From Italy, children will surely get amazed with stories to be told live during the “Lakbayin natin ang EU”:  “The Young Shrimp”  and “Tonino the Invisible” by  Italian writer Gianni Rodari.  Incidentally, this year is the 100th birth year of Rodari. Writer Rodari is regarded as the most important children’s literature writer in Italy.

The Philippine-Italian Association and the National Library of the Philippines (NLP) shall continue their storytelling sessions at the Facebook Page of the NLP.

Meanwhile,  the Embassy of Poland through Chargé d’Affaires, a.i Jarosław Szczepankiewicz, shall teach kids a  traditional birthday song in Poland. The birthday song is  “Sto lat” (One Hundred Years)  and is sung to express good wishes, good health and long life to a person. It is also a common way of wishing someone a happy birthday in Polish. The duration of the “Happy birthday” song, incidentally, is also the time needed to wash hands during this pandemic.

The EU Delegation to the Philippines has invited a gifted filmmaker Jade Dandan Evangelista, 8 years old, to present her film “Get Well Soon”. Her wish through her film is “for the world to get well, safe and better”.  Jade is a digital native artist and expresses herself in music, coding, clay and cardboard sculpting, drawing, video, and animation. She is a Grade3 homeschooler at Homeschool Global – Victory Christian International School. Her first short film is doing the rounds as part of the official selection in BAM! Festival, Mostra Internacional Cinema Educatiu (MICE) in Valencia and has been named as a semi-finalist in Zoom.14 in Slovenia.

The Access to Sustainable Energy Programme (ASEP), Save the Children, and FSD have also contributed videos, especially for children to showcase some reminders on what children can do during this pandemic and beyond. These three NGOs are three of the hundreds of partners on the ground of the EU Delegation in the Philippines

Ode to the Stars and to the Moon

What goes on beneath the skies at night? What stars could be seen?  How can you better view the moon and when through your telescope?

All these and more could be answered in the first-ever virtual stargazing and moon gazing event by the EU Delegation to the Philippines and the Manila Street Astronomers and the Bedan Society of Young Astronomers.

No less than, Mr. Giovanni Seritella, Programme Manager for Environment and Climate Change, EU Delegation to the Philippines together with Professor Jun Cajigal and Doods Perea of the Manila Street  Astronomers will do the honor to present different aspects of astronomy – stars, constellations and tips and how to observe the planets and other celestial bodies – with astronomers and astronomy enthusiasts. They will also show how to maximize the use of telescopes to better appreciate the wonders of the night skies.

Mr. Serritella holds a Master of Science Degree in Environment & Climate Change and a Bachelor of Science Degree in Environmental Sciences from the UK.  He is currently pursuing a post-graduate online degree course in the UK in Astronomy and Planetary Science. He is an enthusiastic amateur astronomer and astrophotographer and a member of the Astronomical League of the Philippines. Professor Cajigal is the founder of the Bedan Society of Young Astronomers. He teaches at San Beda College and Pamantasan ng Lungsod ng Maynila. The astronomers shall also be on-hand to respond to comments and questions on astronomy on 6 June.

From the Embassy of France, Mr. Martin Macalintal, the cultural attaché will provide a musical number (on piano) “SOUS LE CIEL DE PARIS” (Under Paris Skies) by Hubert Giraud. The music is from the film of the same title released in 1951 then popularized by Yves Montand and Edith Piaf.

Martin studied at the University of Paris IV Sorbonne and the Institut d’Etude Politiques. He is an amateur musician and is a member of the oldest Big Band in the country founded by the late Secretary for Foreign Affairs Raul Manglapus.

This event also draws inspiration from the EU’s Copernicus programme that is designed to monitor the earth 24/7 through a number of orbiting satellites to better understand our living environment and the many challenges it faces.