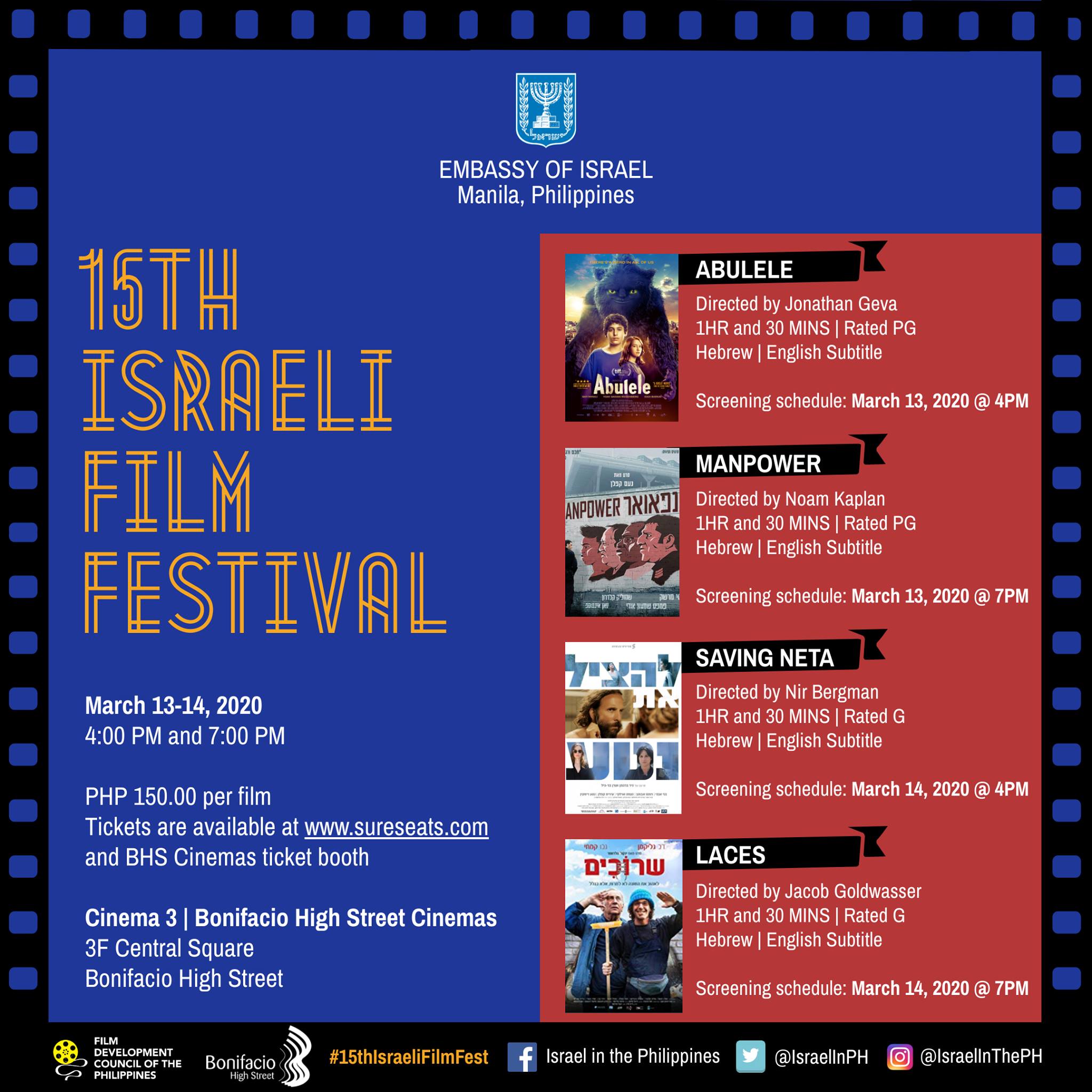 From March 13-14, 2020, the Filipino and other audience will experience the artistry of Israeli cinema at the 15th Israeli Film Festival.

Under the auspices of the Embassy of Israel in Manila, in partnership with the Film Development Council of the Philippines, the Israeli Filmfest hopes to promote and showcase the cultural and cinematographic features of Israeli films to the Filipino audience through this event.

The four critically acclaimed Israeli films will be featured on the 2-day film festival at the Cinema 3 of Bonifacio High Street Cinemas, Central Square.

Here are the exciting Israeli movies which you can enjoy.

Adam, a ten year-old, meets Abulele, a huge, friendly, invisible ancient monster. The two become best friends, but when a government Special Forces unit arrives to capture Abulele, Adam will have to put his own past behind him in order to save his friend, learning along the way that when you really love someone, you’re never really alone.

Meir Cohen is a decorated police officer who barely earns a living. His new assignment of deporting African migrant workers from Israel “of their own free will,” teaches him that foreigners aren’t the only ones who have no future in this country. Other plotlines intertwine with Meir’s story: an Israeli-Filipino boy fighting for recognition, a taxi driver whose children are migrating to a distant country, and a veteran migrant worker who’s forced to decide whether to leave or to hide until trouble passes.

Noam Kaplan’s Manpower delicately sketches a portrait of four men in crisis. Moving between scathing realism and subtle irony, the film raises questions of belonging and uprooting, exile and emigration, home and family.

Four women with nothing in common each finds her life profoundly altered by an encounter with a mysterious stranger, in the Israeli anthology-drama SAVING NETA. A collection of stories spanning the seasons, each episode introduces a woman “on the verge”: a career police officer unable to cope with the stress of work and her teenage daughter; a lesbian cellist ambivalent about raising a child with her partner; a mother who plans to tell her children she’s getting a divorce; and a businesswoman who goes home for her mother’s funeral and must institutionalize her mentally challenged sister. Impacting each of these fractured lives is Neta (Benny Avni), a drifter struggling with his own personal crisis.

“Laces” tells the story of a complicated relationship between an aging father and his special-needs son, whom he abandoned while he was still a young boy. Reuben’s (60) kidneys are failing and his son Gadi (35), wants to donate one of his own kidney’s to help save his father’s life. However, the transplant committee objects to the procedure claiming that Rueben, acting as Gadi’s sole legal guardian, does not have the right to authorize such an invasive procedure. Gadi, who recently lost his mother, is afraid of losing his father as well. He feels he finally has the chance to do something meaningful; to become a man and stand on his own. He’s furious with the committee’s decision and sets out to fight for his right to save his father’s life. Through the film’s portrayal of a relationship full of love, rejection and co-dependency, it manages to shed some light and question the importance of human life, human connection and if life is even possible without it either one of them.

Tickets are available via www.sureseats.com and BHS Cinema ticket booth for PHP 150.00 only. Want to score some free tickets? Follow our official Facebook page: Israel in the Philippines for surprise announcements! #15thIsraeliFilmFest