First batch of Davao durian arrives Down Under 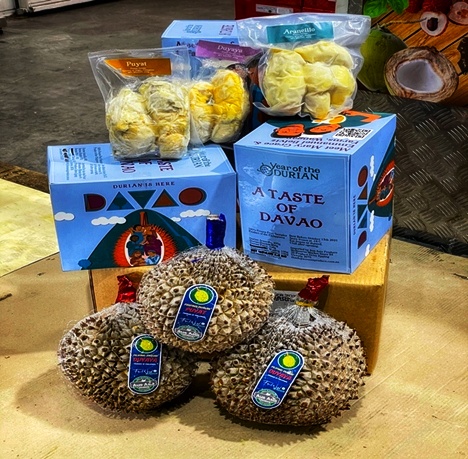 The initial shipment of  two varieties of durian called Puyat and Duyaya in whole pieces with shell and a tasting sampler pack arrived at the Port of Melbourne on Tuesday, 2 March, made possible by Melbourne-based importer, Aus Asia Produce Pty Ltd.  Aus Asia Produce is an Australian company that specializes in importing and distributing exotic tropical fruits, Asian vegetables, herbs and other products.

“The durian varieties included in the shipment are Puyat and Duyaya. Puyat is sweet with a hint of “bitterness” as desired flavor amongst new generation durian connoisseurs. Whilst Duyaya has the most flesh of any durian I have ever seen in my life, and I’ve eaten many before and this is even more meaty,” said Thanh Truong, director of Aus Asia Produce Pty Ltd.

“The first batch of shipment also includes a Tasting Sampler Pack or Durian Box containing 3 varieties of durian: Puyat, Duyaya and Arancillo curated by “Year of the Durian” writer and traveller Lindsay Gasik, the most travelled durian blogger in the world,” added Mr. Truong.

Philippine Ambassador to Australia Ma. Hellen B. De Le Vega said this is a breakthrough development that could further expand exports of other fruits and vegetables from Mindanao. “The Philippine government continues to find ways to make available our food products here in Australia and we are working with stakeholders in government and in business to deliver premium variety to the Australian market,” the Ambassador said.

In the meantime, the Department of Trade and Industry, through the Philippine Trade and Investment Center (PTIC) in Sydney said the Philippines is looking forward to more cooperation between Australian and Philippine companies that will bring more Philippine high-quality, world-class food products to Australia and make it available to both Filipino and Australian mainstream consumers.