The EPIFF (European Philippine International Film Festival) will hold its third edition this 2020 online due to the COVID-19 pandemic. Founded by renowned filmmakers, Ruben Soriquez and Maurizio Baldini, and in partnership with the Philippine Italian Association (PIA), the Italian Chamber of Commerce in the Philippines (ICCPI) PI under the auspices of the Film Development Council of the Philippines, the EPIFF will take place this coming October 24 to 25, 2020. 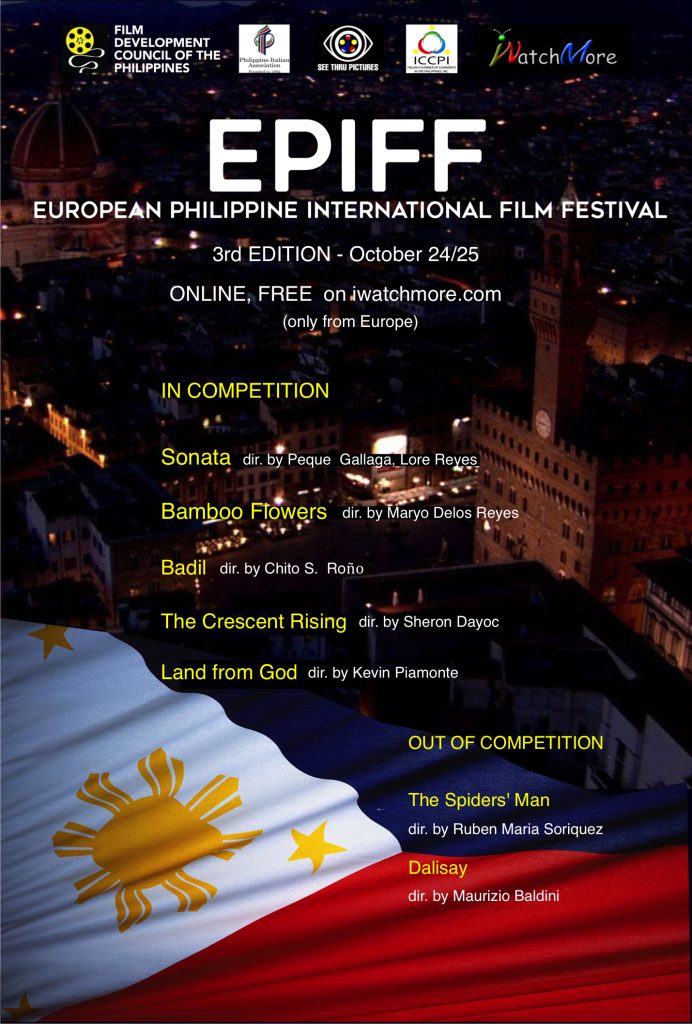 After its successful first two editions, the EPIFF will continue to host the festival that promotes the art of Filipino Cinema in Italy and all over Europe as well even with the current situation. This festival is a means to allow both Italians and other Europeans to have a better understanding of the complexity of the Philippine society. From its diverse and rich culture to its amazingly beautiful landscapes, the EPIFF will be able to showcase these during the 2-day festival to people all over Europe through the new indie and classic movie streaming platform at iWatchMore
(www.iwatchmore.com/categories/epiff).

The festival will display five films that will be competing for the coveted EPIFF awards such as the Best Film, Best Director, Best Actor, Best Actress, Best Cinematography, and the Audience Award. The previous two editions saw Honor thy Father of Erick Matti and El Peste of Richard Somes winning the Best Film award last EPIFF 2018 and 2019, respectively.

This 2020, the five films that will be competing are the following:

Aside from the five competing films, the 2020 EPIFF will also be showcasing two films for everyone to enjoy by the festival’s very own founders. Ruben Maria Soriquez’s 2019 film named The Spiders’ Man (trailer) is one of the non-competing films available during this years’ EPIFF in which two half-brothers, one of which is affected by Autism and Schizophrenia, had thieves burst into their home. When the thieves have failed to find any money, chaos ensures and things got out of hand. While Maurizio Baldini’s 2016 film called Dalisay is the second non-competing film in the festival where it stars Sue Prado who’s character went through an unfortunate accident where she also lost both her parents. As she grows closer to a woman called Nida, she gets to know what higher love is and how the rhythm of nature affects each of our souls.

Don’t miss out on the third edition of the EPIFF which will be hosted by the virtual godmother of the 2020 EPIFF, Ms. Cherie Gil herself! EPIFF is organized by the Island Stream Cultural Association of Florence, Italy, in partnership with various organizations in the Philippines. You can learn more about the festival by visiting their website at https://www.epiff.org/