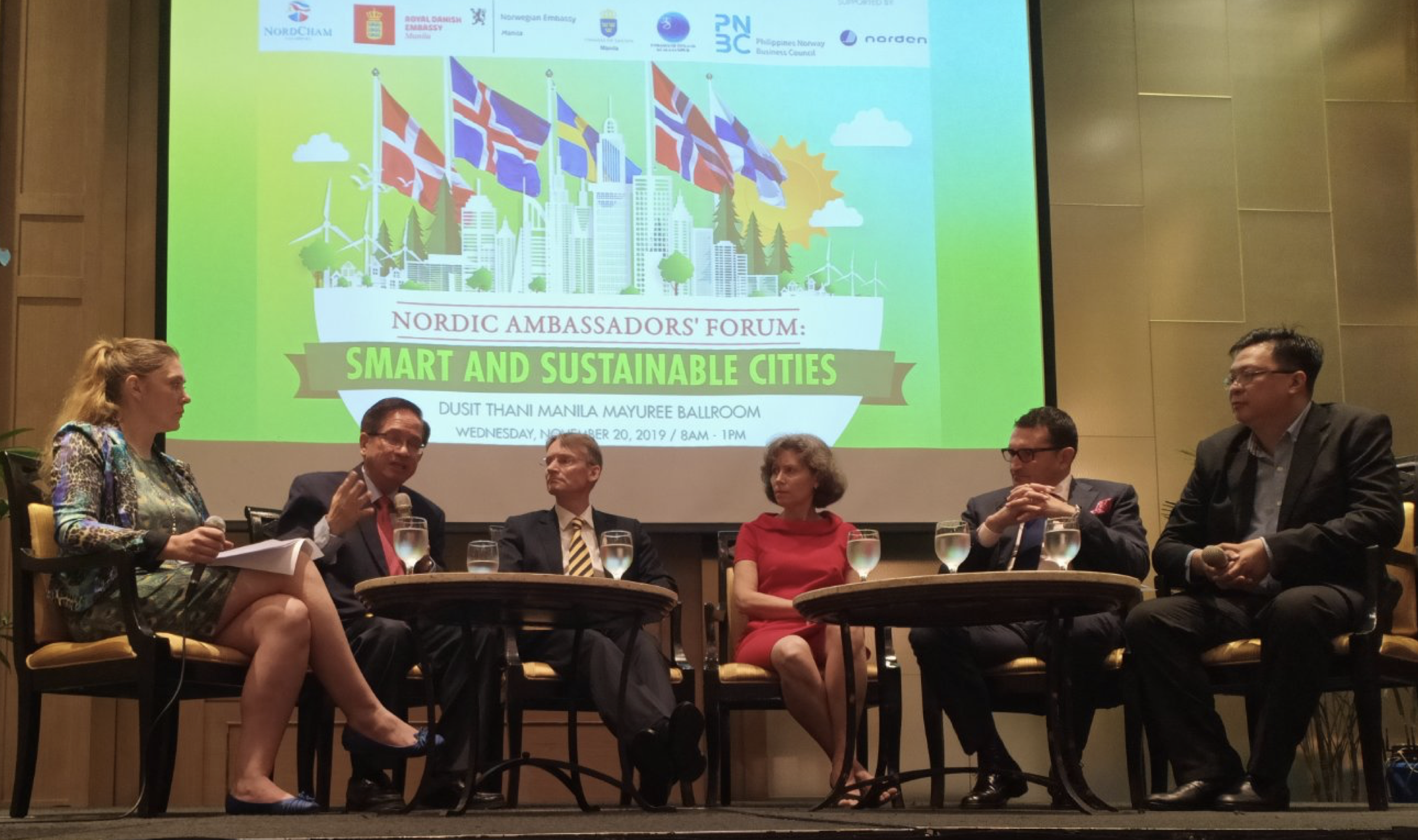 Valuing sustainability, innovation and growth, NordCham Philippines, together with the Embassies of Denmark, Norway, Sweden in Manila, the Embassy of Finland in Kuala Lumpur, and the Philippines Norway Business Council gathered various companies and individual from both private and public sectors in the successful Nordic Ambassadors’ Forum on Smart and Sustainable Cities held last November 20 at the Dusit Thani Manila in Makati City.

The Nordic Ambassadors’ Forum is part of the 2019 NordStar Event Series on Innovation and Sustainability and brought together key Smart City stakeholders in both private and public sectors to share the best practices they embarked in their respective cities.

Speaking to THEPHILBIZNEWS, the Chairman of Smart Cities and Innovation Committee Alejandro Melchor III said, “The Nordic countries know whereof they speak. They really value sustainability and innovation. I really wish our local executives are here to learn from them.”

When asked if the sustainable and smart city is workable in the Philippines, Melchor said, “Definitely. But this is not an overnight endeavor.”

“It entails political will and having a foresight on the part of the Local Government executives is empirical,” he added.

“There are already some cities that have adapted this “way of life”. I call it a way of life because when we see the Nordic countries and their people, it’s in their consciousness and manifest in their lives the care for environment, sustainability and growth as they pass it on to the young generations and that will be their legacy,” the Chairman of Smart Cities and Innovation Committee concluded.

Speaking to THEPHILBIZNEWS, Swedish Ambassador to the Philippines Harald Fries said, “The best way to achieve the smart and sustainable city is to start in a small city. The Philippines can learn from what Sweden has been doing for decades.”

Ambassador Fries further explained that there are many things that the Swedish government can offer to the Philippines to achieve the smart and sustainable cities such as the knowhow and technology. As well as study programs where the LGU executives can learn a lot from Sweden’s sustainability programs.

Come together and work together

For Ambassador of the Kingdom of Denmark to the Philippines Grete Sillasen, she pointed out the importance on making a collective strategic stand on the issue on smart and sustainable cities in the country.

The Danish lady ambassador also explained that people should not just take the concept of “smart and sustainable cities” as it is. There is a need for concrete strategic action to make things happen.

She underscored that all the stakeholders cannot go on with the (status quo solution), and hope and see that things will work out, but they don’t.”

“The city is congested, the seas are polluted, people waste their time (in traffic), people get sick and we should start somewhere, and not the “piece meal solution (but holistic), added Ambassador Sillasen.

When asked if the notion that embarking on smart and sustainable program in a country is costly, Ambassador Sillasen said, “Initially and on the surface it looks expensive, but in the long run it is cost effective and economical just like what they are doing in Denmark and other Nordic countries. But the Filipinos need to come together and work together to make the smart and sustainable cities a reality.”

Be a responsible citizen is the key

Norway Ambassador to the Philippines and Palau Bjorn Jahnsen shared to THEPHILBIZNEWS that by being responsible citizens and have conscience about nature by maintaining nature clean, is a key step to appreciate the importance of having sustainable cities to live.

Ambassador Jahnsen also shared that all Norwegian residents in Manila have installed solar panels in their respective places to make sure that they live what they preach.

When ask if the concept of Smart and Sustainable City is attainable, the Norwegian Ambassador just like other Nordic Ambassadors believes so.

“While we (Norway and Philippines) may have our respective challenges, I really believe that by collaborating with others, taking a conscious effort to be responsible citizens, the Filipino can transform the smart and sustainable cities. In the forum, many shared their real experience how they succeed in creating a sustainable and smart cities,” Jahnsen concluded.

Meanwhile, NordCham Executive Director Joona Selin suggested to learn from the countries that have successfully embarked the Smart and Sustainable Cities, however, the way to do it is not through “copy-paste” method because each city has its own needs and issues to deal with.

“The challenges will always be there, especially the resistance. But if you know what you are doing and you let the people on the ground know and understand what is being done will certainly lessen resistance,” Selin added.

“But one must have the political will and look at the bigger picture on the project. That is why we hold this forum, for everyone to learn, by bringing together the key Smart City stakeholders in the private and public sectors to inspire others and use their initiatives as reference, ask question and learn during the discussions, and know how others dealt with all the issues that they had to face in the midst of resistance in their initiative,” the NordCham Philippines Executive Director concluded.